The Best Crypto Projects of 2021 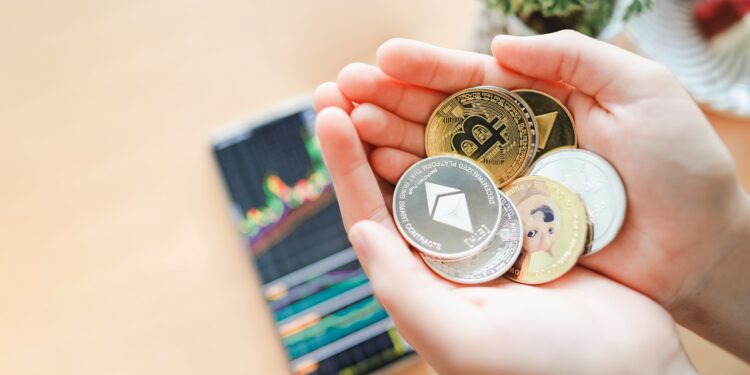 With your help, we have put together a guide to the Top 3 Crypto Projects of 2021, as voted upon by you.

What is a Crypto Project?

Crypto projects are just another way to describe cryptocurrencies and the technology behind the coins, so to understand one, you must comprehend the other.

The basics of cryptocurrency are that it is an internet-based medium of exchange that uses cryptographical functions and blockchain technology to work as a currency.

There are over 2,000 different crypto projects today, and they range from the name brands of Bitcoin and Ethereum to meme coins such as Dogecoin.

This list is essentially The Best Cryptocurrencies of 2021, as voted upon by you.

“Ethereum is the future. We believe by 2030; ETH will have surpassed BTC in total market cap. Keep an eye out for decentralized finance applications being built on Ethereum.” – Ian Balina, Founder and CEO of Token Metrics

With just over 35% of the total vote, taking the top spot is the Bitcoin challenger Ethereum. Ethereum serves as a successful alternative to Bitcoin and has assumed a massive role in the cryptocurrency market.

Ethereum was launched in July 2015 and has now become the largest and most established, open-ended decentralized software platform. In terms of market cap, Ethereum is the second-largest cryptocurrency in circulation and only falls behind Bitcoin.

What makes Ethereum so unique and impressive is its vast array of potential applications. Ethereum is a smart contract platform that enables developers to build and run decentralized applications.

Smart contracts are self-executing contracts where the terms of the agreement between the buyer and the seller are written directly into the lines of code. When running on Ethereum’s blockchain, smart contracts are like a self-operating computer that automatically executes when specific conditions are met. Ethereum is the pioneer for blockchain-based smart contracts.

These abilities and potential applications are then packaged as the value in Ethereum’s token Ether.

“Cardano’s rigorous and thorough approach towards development has enabled them to learn from and avoid the mistakes of other smart contract networks while creating a comprehensive solution capable of supporting the dApps of the future. Despite the longer development roadmap, this approach has put them in a market-leading position against the majority of other smart contract networks in the space.” – Forrest Przbysz, Head of Research, Token Metrics

Coming in 2nd place is the cryptocurrency claimed by supporters to be the “Ethereum killer,” Cardano. Founded in 2015 by Ethereum co-founder Charles Hoskinson, Cardano is the largest cryptocurrency to use a proof-of-stake blockchain.

Cardano was officially launched in 2017, and the development of the crypto project is overseen and supervised by the Cardano Foundation based in Zug, Switzerland. The focus of Cardano is to provide a more suitable and balanced ecosystem for users with an emphasis on scalability, interoperability, and sustainability.

Unlike the majority of crypto projects, Cardano takes an academic and slow approach to development. This approach means that Cardano is willing to undergo a costly and time-consuming process to ensure that the protocol functions as desired. Cardano protocols also undergo extensive peer reviews and scrutiny before actual implementation.

With just under $100 million in market cap, Cardano is the 3rd biggest project in the entire cryptocurrency space, and it is definitely a project to keep an eye on as the space continues to grow.

“Bitcoin is by far the best crypto asset fundamentally as it fares well in almost all parameters under consideration.”– Sam Monac, Chief Culture Officer, Token Metrics

Coming in 3rd place is the cryptocurrency that started it all, Bitcoin. Bitcoin launched in January 2009 as the first decentralized cryptocurrency.

An individual or group of people created Bitcoin under the pseudonym Satoshi Nakamoto. The core concepts of Bitcoin are in its white paper.  The ideas found in this white paper have served as the foundation for all subsequent cryptocurrencies. Without Bitcoin and Satoshi Nakamoto, the cryptocurrency market would not exist as it does today, as Bitcoin is the first implementation of blockchain technology.

Bitcoin is designed to be a peer-to-peer version of electronic cash that allows online payments to be sent from one party to another without going through financial institutions or central authorities.

Bitcoin has been immensely successful as its market cap has exploded to over $900 billion. The closest competitor to Bitcoin is Ethereum, which has a market cap roughly 1/3 the size of Bitcoin’s. Bitcoin has become so successful in the cryptocurrency market that its price is often looked at as the determining factor for the current state of cryptocurrency.

The Favorite Crypto Projects of 2021

This week’s installment of the Moon Awards comes with a bit of bonus content for you, as these awards would not be possible without your help.

The heart wants what the heart wants and what we think is the best project does not always align with the projects we are passionate about.

That is why, with your help and votes, we have put together a guide to your Favorite Crypto Projects of 2021.

“Cardano is a protest movement. People are tired of ETH gas fees, and there is hope that ADA will solve this issue. ADA is the people’s layer one solution. It has an ‘interesting’ valuation. It’s rather expensive. But, as they say at Wall St., the expensive will get more expensive.” – William Noble, Chief Technical Analyst, Token Metrics

With how loyal and passionate the Cardano fan base is, it comes as no surprise that Cardano has been voted as both one of the best crypto projects in the space and a favorite project in the space.

In fact, Cardano came in with over 25% of the total vote as one of the favorite crypto projects.

If you’re interested in learning more about Cardano, look at our earlier write-up as one of the best crypto projects in the space or click the link below to read the complete Token Metrics analysis.

“Over the last twelve months, Polygon has established itself as the Number One layer 2 solution for Ethereum. Using a novel sidechain solution, it aims to address some of Ethereum’s significant limitations, including its throughput, poor user experience (high speed and delayed transactions), and lack of community governance.” – Diego Lara, Partner, Token Metrics Ventures

Previously known as Matic Network and launched in April of 2019, Polygon has exploded in popularity and has risen from a low-cap project to a top 20 market cap project.

Polygon has made a name for itself with promises of delivering a more direct interaction between users and decentralized financial applications/ecosystems. Polygon’s central focus is on reducing the complexity of these actions and describes itself as a Layer 2 scaling solution.

By being a self-described Layer 2 scaling solution, Polygon does not seek to upgrade the existing blockchain layer, which would add further complexity. Currently, Polygon is the most popular Layer-2 scaling solution on Ethereum.

To deliver on these promises, Polygon implements a customized iteration of the Plasma framework that allows for the smoother execution of scalable smart contracts. Polygon also utilizes a decentralized network of Proof-Of-Stake validators and sidechains for off-chain computation.

Polygon shares a few similarities with Ethereum as, like Ethereum, it aims to be the de-facto platform for developers to deploy and securely run decentralized applications. These similarities result in one of the critical features of the Polygon network.

The architecture of Polygon is fully compatible with the Ethereum ecosystem. This compatibility means that any Ethereum application can transfer to Polygon’s network with almost no significant changes.

Another similarity to Ethereum is that the Polygon token (MATIC) has two primary uses. The first is its use as a currency to pay for the transaction fees within the network.  The second is for staking.

“Before Ian promoted me to ICO Analyst in 2018, I was given a skills assessment. I was instructed to use his grading criteria called “Token Metrics” to find all-star projects. Helium was the first project I found that scored over 80%. Fast forward three years and now I have several hotspots, and Helium is one of my favorite crypto projects.” – Sam Monac, Chief Culture Officer, Token Metrics

One cryptocurrency that has been a long-time favorite of the Token Metrics community is Helium. Interestingly enough, Helium barely missed out on being voted one of the Top 3 Crypto Projects of 2021.

Founded in 2013 by Amir Haleem and Shawn Fanning, Fanning also invented Napster; Helium has been a long-time favorite in the Token Metrics community. Helium is also backed by Khosla Ventures, Google Ventures, Multicoin Capital, and many other top venture capital firms in the crypto space.

Calling itself “The People’s Network,” Helium is the world’s first peer-to-peer wireless network that provides a secure and cost-effective way for Internet devices to send and receive data. Essentially, Helium is creating a network that is decentralized and built by communities across the globe.

At the center of Helium’s network is the Helium Gateway. Helium Gateways form open, worldwide wireless networks that provide miles of coverage for low-power devices to connect. The Helium Gateways not only act as a hotspot for devices but are also the world’s first retail crypto miner that uses radio waves to mine blocks instead of power-hungry computations.

The best part is, anyone can become a Helium Gateway owner as they are at a reasonable cost per device, and you receive tokens in exchange for providing connectivity.

The Best Crypto Exchanges of 2021