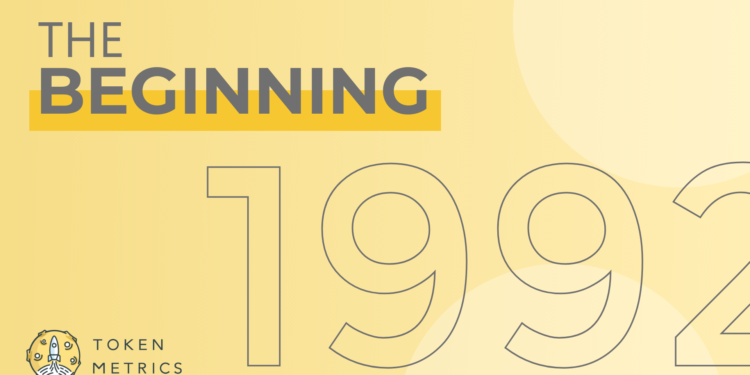 Welcome all to the Chasing Bitcoin blog! This blog will accompany the new Token Metrics TV show by the same name for those who prefer the written medium. Thank you for joining us on this journey as we track the history of bitcoin (BTC) all the way from its origin up to its present quest for $100k.

Our adventure starts all the way back in 1992 when three renegade California computer scientists launched a cryptography mailing list called Cypherpunks. The Cypherpunks were committed to keeping the internet for the people and out of the hands of big governments. They accurately predicted all the censorship, monitoring, and data mining we are seeing today and worked diligently to prevent it any way they could through cryptography and other means. Their belief was that the best way to do this was through a payment system that existed purely on the internet. This would put everyone in the world, regardless of race, color, or creed on a level playing field.

Many attempts were made at creating a digital currency by the Cypherpunks. The most prominent of these was cryptography startup Digicash’s eCash. Digicash was founded by David Chaum who is referred to by many as the father of the Cypherpunk movement. Ultimately, Digicash had to close its doors in 1998 because it relied on a central “bank” and was beat out by PayPal and credit cards in terms of user adoption. This taught the Cypherpunks that if a digital payment system were to work it would need to be decentralized.

Flash forward 10 years to the 2008 financial crisis. Millions are out of work, the world economy has collapsed, and central banks have no other option but print money to stop the bleeding. Then, seemingly out of nowhere, on Halloween 2008, like a superhero flying down to save the day, the mysterious Satoshi Nakamoto shared his bitcoin whitepaper with a cryptography mailing list. To this day we do not know who the savior Nakamoto is, but his impact is felt on this world. On January 3, 2009 Satoshi constructed the genesis block of bitcoin, in it containing the newspaper headline “The Times 03/Jan/2009 Chancellor on brink of second bailout for banks.”

Most that received the original whitepaper doubted and even criticized Satoshi’s radical idea of blockchain technology; with one exception. Hal Finney, a computer scientist living in California read the whitepaper and believed in Satoshi’s vision. A few days after Satoshi mined the genesis block he sent Hal 10 bitcoin. This was the first transaction to take place on the Bitcoin network. Tragically, Hal passed away from ALS in 2014, but his contributions to Bitcoin and by consequence the world are unparalleled. Thank you Hal.

Thanks for reading our first Chasing Bitcoin blog post! Tune in next time to learn about the first bitcoin exchanges and the world’s most expensive pizzas.

Ethereum Could Be as Influential as JavaScript