Why The Fake Walmart/Litecoin News Was Actually Pretty Credible 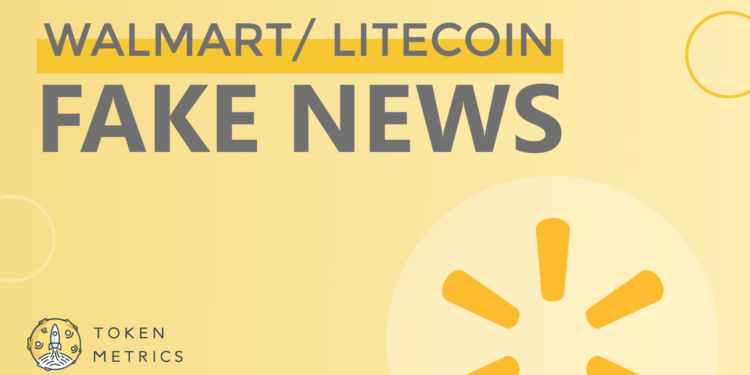 The crypto news cycle got a jumpstart on Monday, September 13, 2021 with the alleged news that Walmart would begin accepting Litecoin as payment for its products. It didn’t take long for the crypto market to respond accordingly.

LTC skyrocketed some 30% in the wake of this purported partnership with one of the largest American retailers. Where it had previously been trading in a range of $175-$185, it spiked all the way above $230.

It was a good day to be holding LTC, but it didn’t last. The news of this partnership was completely false and fraudulent. Someone made a lot of money that day by manipulating the media, cooking up a perfect storm of credible-enough fake news.

How naive we all were! Let’s conduct a brief postmortem on how and why this piece of media manipulation worked as well as it did.

If it was going to genuinely adopt crypto payments, Walmart would work with a known founder and team.

Litecoin was created by Charlie Lee. There’s an associated Litecoin Foundation that operates as a nonprofit organization with the mission of advancing Litecoin for the good of society. Litecoin and its people are a known entity — they don’t hide, they make their moves in public.

By comparison, a cryptocurrency like Bitcoin has an unknown creator and a shadowy reputation. There’s no one to partner with

If you lead a major business like Walmart, which is the more appealing team to collaborate with?

Just one week before this fake news broke, Litecoin issued a major update to how its network operates. In short, it became a bit more akin to Ethereum, with smart contract, DAO, and NFT functionality.

Smart contracts could be especially compelling for those who do business on the scale that Walmart does business. To offer a hypothetical example, Walmart customers paying for something in Litecoin might lock funds into a smart contract that paid for their items on layaway.

This is just one use case that might make sense for retail, but smart contracts have already proven their utility many times over on other blockchains. For Litecoin to partner with Walmart after a major tech upgrade, well, it just makes sense.

The announcement appeared on a major newswire service.

The source of this fake news was a very official-looking press release that appeared on a media service called GlobeNewswire. If you’re unfamiliar, the broad strokes go like this: companies can pay a fee to publish press releases on this service that helps distribute news to the media. In this case, the fake release came from an email address ending in “@walmart-corp.com”, which is not any official website affiliated with the company.

No matter, it was convincing enough to get past whatever checks GlobeNewswire conducted (or didn’t conduct). Fees for this kind of distribution are usually quite high, so it’s hard to imagine they were skeptical after any payment had cleared.

A number of highly reputable media outlets reported it as fact.

CoinDesk, Decrypt, Blockworks, CNBC, Reuters, ZeroHedge, and even Bloomberg Terminal were all sucked into the fake news mire, reporting the fraudulent press release as genuine news. This merely served to pour gasoline on the fake news fire, spreading (false) word far and wide to various crypto and finance audiences.

Not a good look.

Imagine being a social media professional for Litecoin — your entire job is to share news that you think your community will love, and you start seeing reports that your company is partnering with Walmart. We imagine it’s only natural to think something like, “Why didn’t anyone tell me? I better spread the word!”

Yes, even the official Litecoin Twitter account was duped by the fake news. If there’s any lesson in this turn of events, it’s only to underscore the imperative that comes with any kind of investing, whether crypto or legacy: do your own research!

Whoever masterminded this Litecoin pump had clearly done their own research. A lot of people got played. Only a few profited.

Could Fed Vacancies Lead to a CBDC?