Blockchain combines the openness of the internet with the security of cryptography to give everyone a faster, safer way to verify key information and establish trust. Blockchains record transactions and create a block to store the information of transactions.

We have seen the sharp increase in the popularity of blockchain technology in 2018 and the dramatic drop in 2019. According to CB Insights, the deal activities within different investment types increased in 2018 and had a slight drop in 2019. However, we are still positive at the opportunities for blockchain in 2020.

Industries utilizing blockchain technology to improve their operational efficiency include industrial products and manufacturing, energy and utilities, and healthcare. 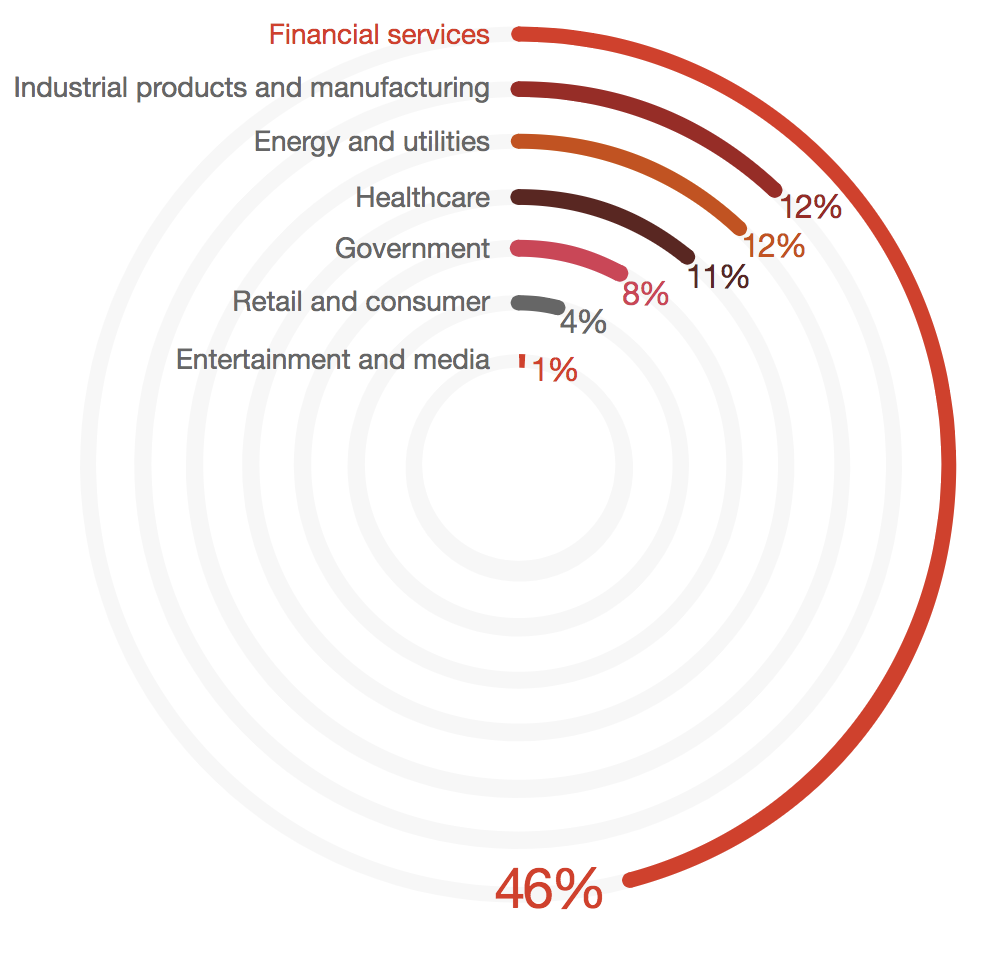 A new survey in 2020 reveals that 49% of businesses in the technology, media & telecom (“TMT”) industry considered investing more than US$ 5 million in blockchain technology during the past 12 months. To these industries, the advantages of blockchain technology are data transparency and speed of data access.

According to IDC’s report in 2018,  the United States is the leading country of blockchain technology. The market share of the US in blockchain spending accounts for 39.7%.

Huobi Research Institute reveals that China, as an emerging market for blockchain technology, is expected to increase its spending to around US$2 billion by 2023. Moreover, China has the most amount of patents with blockchain currently, accounting for 63% of the total global patent applications by the end of 2019.

Blockchain Technology To Be A Strategic Priority

The first survey question is about the views of blockchain’s relevance within organizations. In 2019, nearly 53% of Deloitte’s Global Blockchain survey respondents believe that blockchain technology is essential to their organizations and they would include it in their top five strategic priorities.

In 2020, the COVID-19 pandemic increased people’s attention to blockchain technology. On May 1, 2020, the WSJ reported that blockchain could be a solution to fight against COVID-19.

The article emphasized that blockchain could push innovation and transformation for industries like public health since blockchain improves the way we share data and guarantees the security of our private information.

The information above shows that blockchain is becoming increasingly popular in different industries. In the era of big data, businesses are looking for opportunities to complete their innovation and transformation. We think blockchain technology is the entry point of data transparency and high accessibility.

Indeed, we cannot be more familiar with how cryptocurrencies work on blockchains like Bitcoin and Ethereum. In the next section, we will discuss blockchain applications within enterprises like Amazon and Facebook.

This research report from Everest Group reveals the leading corporations for enterprise blockchain services. Companies like IBM and Accenture are leaders, while EY and Deloitte are considered to be major contenders.

Forbes has listed the top 50 enterprise blockchain companies, and members of the list include companies like Amazon, Ant Financial, and J.P. Morgan.

Big Tech Companies in the US

Amazon Managed Blockchain is a fully managed service that makes it easy to create and manage scalable blockchain networks using the popular open-source frameworks Hyperledger Fabric and Ethereum. Amazon Managed Blockchain eliminates the overhead required to create the network and automatically scales to meet the demands of thousands of applications running millions of transactions.

In June 2019, Facebook announced its plans for Facebook Libra, a cryptocurrency backed by a basket of stable assets including the U.S. dollar and government bonds. The announcement brought Facebook critics out of the woodwork who loathed to cede monetary control to the same company whose laissez-faire approach to its technology may have contributed to the unexpected outcome of 2016’s American presidential election. Already many original Facebook Libra Association members, including Visa and Mastercard, have dropped out of Facebook’s consortium.

America’s biggest bank is keeping quiet about the progress of its JPM Coin, the digital currency it announced in February 2019 to help banks settle transactions more quickly.

It does, however, admit, that 100 institutions are now using its new “Interbank Information Network,” a blockchain that speeds up cross-border payments between banks by using a shared ledger to resolve delays that arise when, for example, one bank thinks a transfer might violate an international sanction.

Ant Financial, the operator of AliPay, is a division of Alibaba. Early investors in Ant Financial included funds controlled by the Chinese State. In May it raised $14 billion at a reported $150 billion valuation in anticipation of an IPO soon.

A recent example of Ant using blockchain is cheaper remittances from Hong Kong to the Philippines. Hence, the net effect is similar to Ripple’s cross-border payments. They’ve also been involved in a rice traceability project and blockchain-based prescriptions.

Hype Cycle is Over

2019 revealed the emerging shared belief that blockchain is real and that it can serve as a pragmatic solution to business problems. Even leaders, initially wary of tech-based solutions, appeared to see potential in the technology.

Additional signs of blockchain’s maturation could be seen in the diverse—and sometimes differing responses of those surveyed; the barriers to entry that they faced varied, as did the perceived advantages of blockchain which they identified.

To embrace this trend, leaders proposing blockchain-enabled solutions must proactively assess where these unique blockchain capabilities can either contribute to their organizations’ strategies or help identify new digital business models.

The Rise of Tokens

As an emerging technology, we believe that there will be more positions for blockchain technology in the future. By looking at a wide array of blockchain applications, it’s quite obvious that demand for blockchain developers will explode in the year 2020, as the increasing numbers of organizations- small or big- see the advantages of blockchain adoption.

A survey conducted by PwC in 2018 shows that most respondents consider regulatory uncertainty to be the number one challenge. Regulations have always struggled to keep up with advances in technology. Indeed, some technologies like the Bitcoin blockchain bypass regulation completely to tackle inefficiencies in conventional intermediated payment networks.

Although blockchain technology is increasingly popular, we still think the technology is immature. Technical aspects like data transparency, privacy, and standardization should be considered. However, we could view these challenges as future opportunities for the blockchain industry.

We believe more businesses will combine their main businesses with blockchain, especially in technology, media, telecom, manufacturing, healthcare, and financial services industries. In terms of leading countries in blockchain, we think China would be a leader in the world for blockchain technology since it had huge spendings on the patents.

Additionally, we discussed different corporate blockchains within industries of finance and high technology. Ant Financial has developed its financial technology with a blockchain focus. It has affected Chinese citizens widely from online payments to making loans.

As an immature technology, blockchain is still confronted with different challenges, but we think these challenges could be transferred into opportunities in the long term. During the pandemic in 2020, we have seen how blockchain technology supported the trades between small businesses and improved data accessibility in the healthcare industry.

Therefore, we are confident that blockchain technology is promising and the hype cycle is close to an end. In the long term, blockchain will be able to improve operational efficiency within companies and enhance the transparency and security of data.

The Best Crypto Wallets of 2022