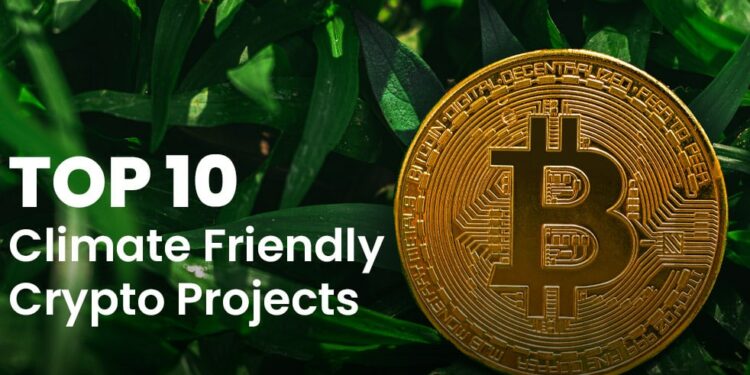 In honor of Earth Day (April 22), let’s cover the “Top 10 Climate Friendly Crypto Projects in 2022”.  Projects generally follow one of two blockchain models to ensure the validity of cryptocurrency trading transactions: Proof-of-Work (POW) or Proof-of-Stake (POS).  POW involves solving complex cryptographic mathematical equations, which consumes a substantial amount of energy. In contrast, POS miners stake their digital coins in a stake pool for the right to validate new block transactions. This method was developed largely as an alternative to POW because it reduces the amount of energy required to mine, hence reducing its negative environmental impact.

The projects selected here all made the choice to use POS or their own innovative mechanism, which was designed with the environment in mind. In no particular order, these are 10 of the most eco-friendly crypto projects.

Near (NEAR) is the first PoS (Proof-Of-Stake) blockchain to successfully achieve efficient scaling via Sharding. Founded by Alexander Skidanov and Illia Polosukhin, NEAR is quickly becoming the next-generation blockchain being leveraged for the creation of open-source platforms for decentralized applications. With the recent introduction of their Rainbow Bridge, users of different blockchains can effectively utilize the scaling of NEAR, making it the universe of chains. With high speeds, low fees, and progressive UX, NEAR’s climate-neutral blockchain is ready for explosive growth while simultaneously eliminating the barriers to web3 adoption.

Despite most of crypto moving significantly bearish, NEAR has made steady gains as of late. Read our NEAR analysis: Declining BTC Dominance and the Rise of NEAR – January 28, 2022.

Solana (SOL) is proclaimed to be the “Fastest blockchain in the World” and is quickly becoming the go-to blockchain of choice for RUST-based developers. Achieving 1000+ TPS, Solana’s ecosystem has been experiencing tremendous growth as one of the primary go-to blockchain of choice for new developers looking to build robust applications. Utilizing similar architecture as PoS(Proof-Of-Stake), Solanas PoH(Proof-Of-History) is also environmentally friendly and not dependent on energy usage.

PowerLedger is an energy-efficient blockchain built on Solana. The platform enables the ability to track and trace energy produced or consumed in real-time, allowing for a more efficient energy grid.

PowerLedger uses POWR and Sparkz tokens. Sparkz represents the tokenized value of electricity in varying markets around the world. This allows both consumers and producers to buy and sell energy at any time in their respective currency.

Cosmos describes itself as “a decentralized network of independent parallel blockchains, each powered by Byzantine Fault-Tolerance consensus algorithms, which guarantees safety for up to a third of Byzantine, or malicious, actors.” Cosmos wants to create an “Internet of Blockchain” where blockchains built using its open-source tools Tendermint, Cosmos SDK, and IBC can communicate with each other. Many well-known projects like Juno Network, Crypto.com, Terra, and Secret have created blockchains using Cosmos and are interoperable through Cosmos’s ecosystem. Cosmos’s native token $ATOM is used as a spam-prevention mechanism, for staking (securing the blockchain), and for the governance of the Cosmos Hub.

Algorand was designed with a commitment to create a sustainable blockchain through the POS mechanism. They aim to be the greenest blockchain and have already achieved a carbon-negative footprint. Moreover, Algorand is furthering the offset of its energy consumption by partnering with ClimateTrade, an organization focused on reducing carbon footprints. A few organizations using Algorand’s network include Global Carbon Holding and Planet Watch.

Polygon utilizes its own proof-of-stake mechanism and is known as the “eco-friendly blockchain scaling Ethereum.” Polygon is also launching a new sustainability initiative, “The Green Manifesto,” which will be focusing on carbon offsets. Through this, they are pledging to be carbon negative in 2022 and are partnering with KlimaDAO, an organization committed to fighting climate change.

STEPN is a web3 lifestyle app that introduces “move-to-earn” to build healthy habits and encourage an active lifestyle. By purchasing a sneaker NFT and walking, jogging, or running, you can earn tokens and make real money, or mint new sneakers to expand your energy cap and earn more. In the near future, stakers of the governance coin GMT will be able to vote how much of STEPN’s treasury gets allocated to purchasing Carbon Renewal Credits on the blockchain. Alternatively, users will be able to donate some of their own ingame earnings to go toward Carbon Credit buying.

Hedera operates a proof-of-stake public network alongside its own innovative mechanisms. The blockchain offers a variety of services including a native currency, smart contracts, file service, and consensus service. Because of the POS and DaG mechanisms, they are able to have a carbon-negative footprint. Hedera partners with tech companies such as Google, IBM, and LG Electronics.

Nano is energy efficient and has its own innovative voting mechanism. Moreover, it is free to use, fast, and sustainable. Nano assigns each user their own blockchain, eliminating competition and speeding up transactions. Since all the tokens are in circulation, it removes the need for mining and minting processes to occur. This creates a more environmentally friendly and sustainable future.

Though Ethereum is still using the Proof-of-Work mechanism, they are transitioning into Proof-of-Stake sometime this year. This will result in their overall energy expenditure decreasing by 99.95% once the transition is fully complete. With Ethereum joining the POS movement, we can expect many upcoming crypto projects to use the same or another energy-efficient blockchain.